Only Cores That Matter

You are here: start » netplay

Netplay is a feature enabled by RetroArch and some libretro cores to play games with multiple players over the network. If you want to play Double Dragon on NES with your buddy who sits several miles away from you… using netplay you can play both as Player 1 and Player 2 over the Internet, like if you were both playing on the same console, sitting next to each other.

How does this black magic work?

Netplay relies on a client/server architecture. One of the players starts by setting up a Netplay game room, with a Netplay server, where the other players connect to, as clients.

Also, all isn't “magic” here. There are several limitations to be aware of:

How to enable Netplay?

First of all, make sure you have Batocera 5.25 or later. Netplay is not available for earlier Batocera releases. If you personalized your es_systems.cfg, you need to use the one shipped by Batocera or update yours again based on the current /usr/share/emulationstation/es_systems.cfg as it has embeds new commands to enable netplay.

You need to enable netplay by adding global.netplay=1 in /userdata/system/batocera.conf.

Once this is done, you can check that Netplay is enabled as when you see the help line at the bottom of the screen that tells you that button X in EmulationStation is now used for Netplay options (and not “Random selection” any more)

How to join a Netplay game (client mode)?

One of the players needs to host a Netplay server, to which the others players will connect to. When you are on the “systems” list of EmulationStation (the menu where you can select all the consoles, not the games), pressing the X button will give you a list of all available Netplay servers and games in progress.

Some games are greyed out and marked as “unavailable”: there are some technical reasons why you can't join these games (different core version, game you don't own, or a different version of the game, and so on).

Select one of the “available” games that you can join, and launch it: pay close attention to the messages that are popping up when RetroArch launches. Sometimes, there are limitations that could not be detected before and that will prevent you from playing (for example some cores don't support cross-platform Netplay, meaning that you can't have some players with a PC and others with a Raspberry Pi on the same game). 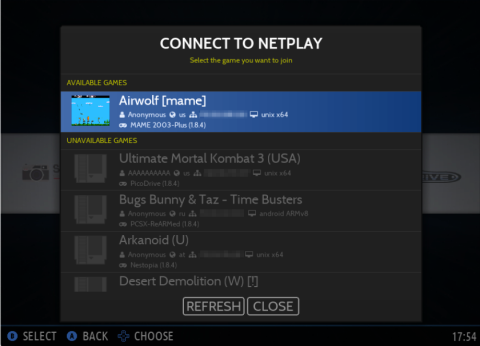 How to host a Netplay game (server mode)?

If you want to host your own Netplay game and let your buddies join it, you can do so by entering the “games” selection menu, and pressing X to launch a NetPlay server. Tell your buddies to join your Netplay room, when your game is launched it should appear in the menu described above.

When you host a Netplay server, you have to make sure that your network is either compatible with UPNP to automatically open the right port, or you can define your own port in the settings, and configure your router and network to keep this port open from the outside.

If you can't do it, or don't know how to do it, you can use the MITM option in the settings, that acts like a relay and simplify the Netplay server configuration.

This is the list for Batocera 5.25, it may change based on the evolution of the cores over time.